FOCUS Productions have been responsible for many award-winning programmes over the last dozen years. Below is a full list of  some of our notable TV credits, some of which have links to separate pages on this website. 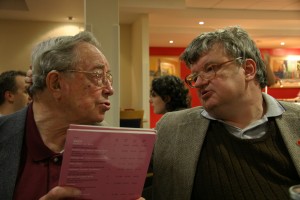 The Savant Wonders of the World – a 90 minute special on the greatest savants in the world. (in production).

Mobility 21. A Series of interative films on blindness, visual impairment and mobility for the British government and London University’s Institue of Education made to implement the policy of Every Child Matters (in production).

The Children Left Behind – a Dispatches for Channel 4. Our latest Dispatches film investigated the failure of large schools to successfully educate many children. Presented by former Bristol head teacher James Wetz.

The Two Dereks – this  film follows the extraordinary life of the blind and severely learning impaired pianist Derek Paravicini, a rare musical savant who has the ability to play any piece of music after hearing it just once.

Ms Dynamite in search of Nanny Maroon, BBC 2 transmitted as part of the 200th Anniversary of the Bill to Abolish Slavery.

Ready or Not – interactive DVD Bristol University’s Graduate School of Education, shows how drama, supplied by Cardiff-based Theatre Iolo, can be used to support the transfer from primary to secondary school.

Dispatches – The Drug Trial that Went Wrong an investigation film for Channel 4. Nominated for a Royal Television Society Award.

The Real Rainman on the life of super-savant Kim Peek, the inspiration for the movie Rainman.  A co-production with The Discovery Channel USA.

Painting the Mind explores where art originates in the brain, looking at stroke artists and savant artists from around the world.

Brainman - The Boy With The Incredible Brain

The Boy with the Incredible Brain (Discovery and Five TV)

This stunning film explores an unusual form of human intelligence which still baffles scientists: the autistic savant, ie people who have phenomenal and inexplicable mental gifts, whilst often suffering from mental retardation and autism. Classically portrayed in the Oscar-winning film Rainman by Dustin Hoffman, this film explores the extraordinary mental talents of British savant Daniel Tammet.

Investigates why the Pope is so enthusiastic about making more saints than all previous Popes combined. Focusing on the strange case of the beatification of Mother Teresa and the miracle she is said to have performed on a “dying” woman in India.

Godfather of the Blues BBC4 and BBC2

A look at the extraordinarily colourful life of British blues legend John Mayall and how he managed to attract so many world-famous rock stars into his Bluesbreakers band. Contributions from Eric Clapton, Fleetwood Mac’s John McVie and Mick Fleetwood, Rolling Stone Mick Taylor and many more.

An examination of the remarkable discoveries, concerning the Copper Scroll, the only Dead Sea Scroll inscribed onto metal, made by professional metallurgist and amateur archaeologist, Robert Feather. His brilliant detective work at the archaeological sites of Qumran by the Dead Sea and at The Temple of Amarna in Egypt have forced leading academics to re-think the origins of Western religion.

The story of what happened when two leading British cancer specialists carried out double blind control trials to test the claim that bras might cause breast cancer. Dr Sydney Singer had put forward the view that the tightness of a bra might impede the body’s natural lymphatic flow which is used to rid the body of toxins. This film presents the disturbing results which most people have ignored.

Pig at the Ritz Five TV

A surreal and barmy documentary which follows a pig ( the famous Grunty) as it is groomed for tea at the Ritz Hotel.  A film with a cult following, crazy and brave

City of the Sea ITV

Time Team host Tony Robinson, who lives in Bristol, explores the rich history of this city on the occasion of the 500th anniversary of John Cabot’s historic voyage to the New Found Land.

Fear of the Falcon ITV

A stunning and characterful film which tells the story of the “war” between pigeon fanciers and bird lovers who protect the once-rare peregrine falcon. Unfortunately for the pigeons , the falcon loves nothing more than to chase pigeons and kill them — and as falcons are the fastest animals alive, the pigeons are dead ducks in this race.

The story of the birdwoman extraordinaire Jemima Parry Jones, one of the worlds leading experts on birds of prey and a renowned falconer. In this highly entertaining film we follow Jemima on her annual trip to Chatsworth where she gives a show that brings gasps all around.

Although 21st century Britain is a multicultural society with a powerful Race Relations Act, there is still racism in many of its major cities. It would seem that the city of Bristol whose wealth was  built on the profits of the Slave Trade  would try harder than most cities to root out racist behaviour – but as this film shows it still has a long way to go.

The Trouble with Kids (series) ITV and Channel 4

In a pioneering series, now being copied by many new programmes, child psychologists, including Lynn Maddern, help parents and  their children to sort out behaviour problems. Once the parents learn how  to reward their children by giving them their attention and time, by playing with them and listening to their needs, most of the problems magically disappear.